Jacob Spon (1647-1685) was son of a Lyonese doctor and scholar of Greek. Spon himself was a doctor with a keen interest in archaeology, as well as a fervent protestant. With his two journeys to the East (1674 and 1676), Spon was the first traveller to tour and explore territories in a scientific manner.

In 1662, Spon travelled to Strasburg to study Greek and Latin, languages necessary for the study of medicine at the time. In Strasburg, Spon met Charles Patin, a man passionate about numismatics, who transmitted his interest in epigraphy and coins to the young Spon. Spon continued his studies in Paris and Montpellier, where he became doctor in medicine in 1667. In 1671, Spon started practicing medicine in Lyon. At the age of twenty-eight, he published a book on the uses of coffee, tea and chocolate, and in 1673 a study on the monuments of Lyon. Spon also kept a lively correspondence with several erudite clergymen.

By 1674, Spon had published a commentary on the “Description of Athens” by Jesuit Père Babin, and later became involved in a scholarly debate with A. G. Guillet, on the same subject. In 1674, he was going to escort the French king's antiquarian in his journey to Greece, but was delayed. Eventually, he sailed from Marseilles to Rome and stayed in that city for five months, studying antiquities and inscriptions. It was there that he met British naturalist George Wheler. The two travelled to Florence, Bologna and Ferrara; in June of 1675 they sailed from Venice to Istanbul, with two more British noblemen.

After sailing along the Dalmatian coast and the Ionian islands, they set anchor at Zakynthos and later Cythera, visited Delos and eventually reached Istanbul. They also visited Bursa and Thyateira in Asia Minor, and stayed in Izmir for some time. In their second journey, they crossed over to Patras from Zakynthos, visited Delphi, travelled to Athens and toured the region of Attica. Spon and Wheler together collected approximately fifty manuscripts and more than six hundred coins.

The three-volume account of Spon's voyage was first published in Lyon in 1678. It constituted a major literary event, and became a landmark in travel literature. It is the product of first-hand investigation, free of plagiarism and also touches on contemporary issues in the Greek territories which he visited. The second volume includes an important glossary of modern Greek words, for travellers' use, while the third volume is dedicated exclusively to the inscriptions and coins collected by Spon during his journey. Spon's travel account was republished in French and was translated into English. Four years later, George Wheler published his own account of their journey, which is in fact but a mediocre copy of Spon's work. In 1680, Spon published his “History of Geneva” and in 1685 an catalogue of ancient Greek inscriptions.

Jacob Spon, who inaugurated the archaeological study of Athens, enriched his account with a few drawings of the standing monuments in the Acropolis area, an important topographical map of the surrounding area, and depictions of some other antiquities. These drawings, albeit rudimentary, constitute the earliest renderings of the main Athenian monuments.

Spon was an erudite traveller, and an insightful reader of classical texts; at the same time, he was the first to combine his theoretical knowledge with field observation, and is thus considered to have inaugurated the archaeology of Athens. Jacob Spon died in utter poverty in Geneva, at the age of thirty-eight years old (1685).

The present edition in Dutch does not include any of the engravings which illustrated the first French edition. However, the text is embellished with a small number of remarkable scenes, which aim to recreate the journey of Jacob Spon and George Wheler in the East.

Frontispiece. A scene from the voyage of Jacob Spon and George Wheler. 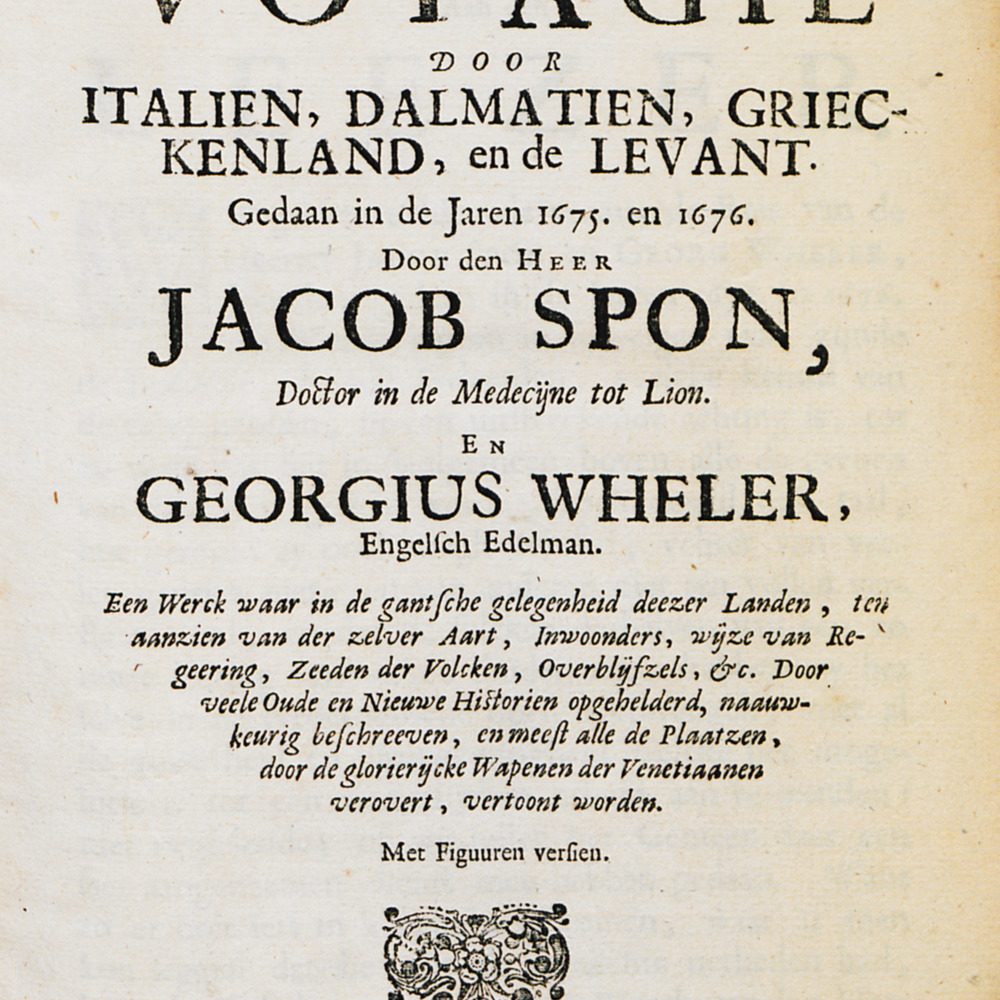 The Library of the Grand duke of Tuscany in Florence. 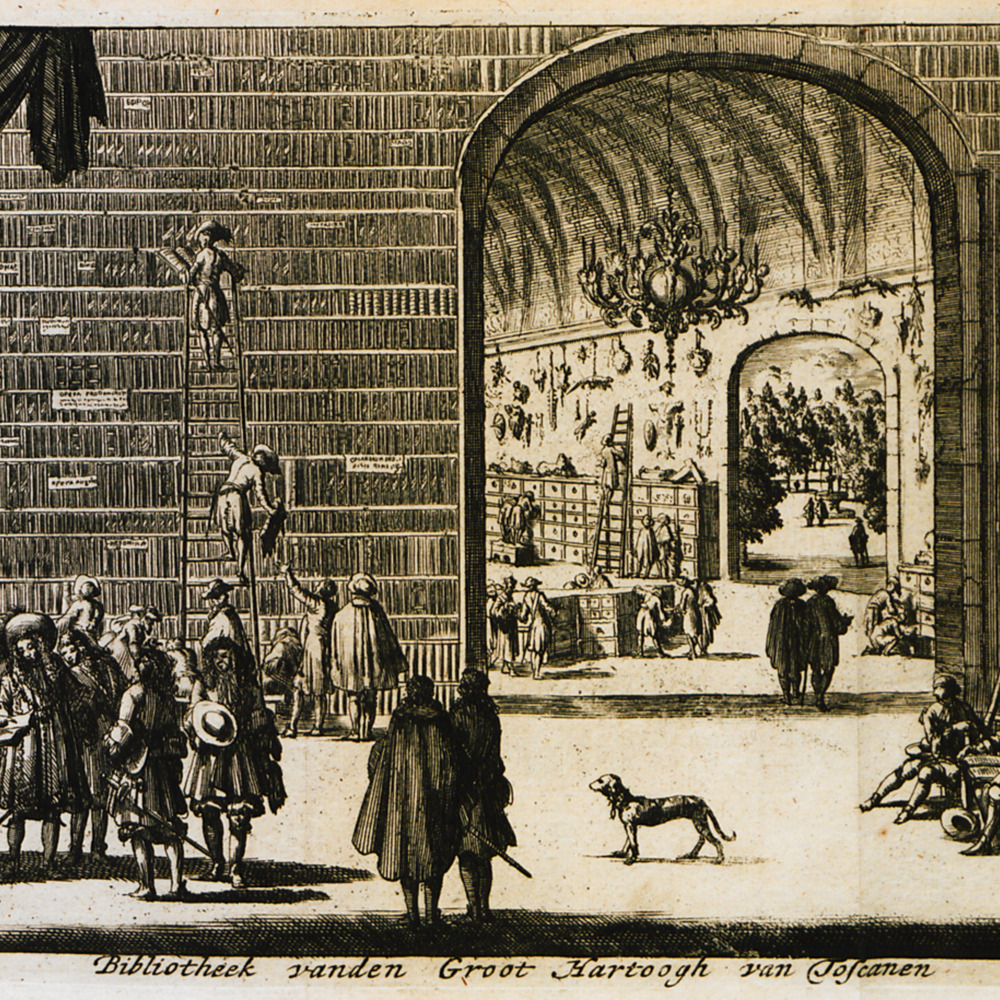 The Sultan rides to the mosque for the customary Friday prayer, escorted by his suite.

Jacob Spon and George Wheler at Izmir. Panoramic view of the city. 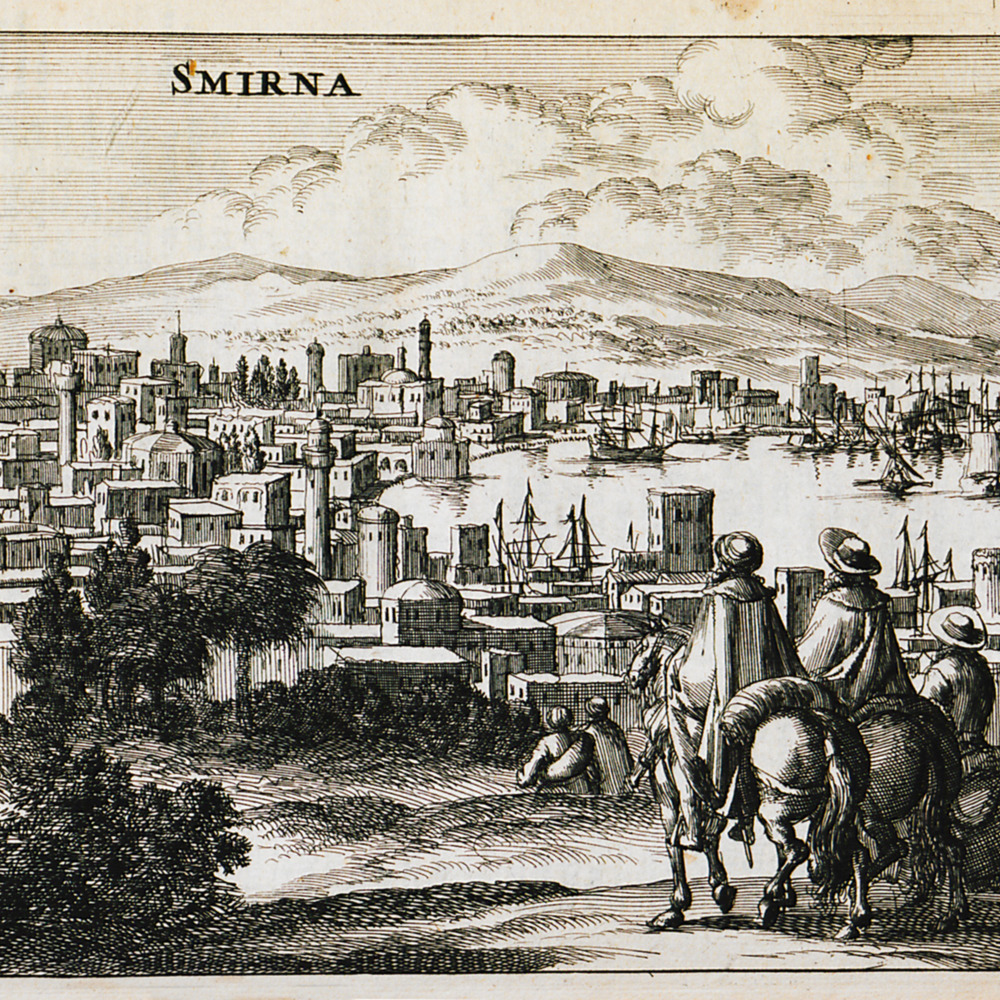