Élie Cabrol (1829-1905) was a French man of letters. He published the account of his stay in Italy in 1883. On 4th April 1889 he started out from Paris, crossed Italy (Pisa, Florence, Ancona and Brindisi) and arrived in Athens by way of Corfu and Patras on April 15th. He stayed in the city for fifteen days.

Cabrol was very well-informed on Athenian political and cultural life. He describes the 19th century buildings, and visits monuments and Museums (the Acropolis Museum, the National Museum and the Polytechnic), as well as Eleusis and Megara, where he witnessed the celebration of the Greek Easter that he describes in his book. Cabrol continued his journey on to Aegina, Poros, Nafplio, Epidaurus and Tiryns, and subsequently to Argos, Mycenae and Nemea. On 1st May he was in Olympia. He then sailed from Patras to Corfu and then Naples. In his descriptions, Cabrol frequently cites earlier travel accounts (by Chateaubriand, Ed. About, S. Reinach) as well as texts by Fr. Penrose, E. Beulé and Ch. Lenormant and other European archaeologists who worked in the first excavations that took place in the Greek state.

Many of the archaeological findings that are mentioned in the text or represented in the plates of this edition, had been discovered and exhibited the years that immediately preceded Cabrol’s journey. This edition was published in a limited number of copies and is embellished with twenty-one heliographs and five lithographs.

View of the southern side of the Acropolis. 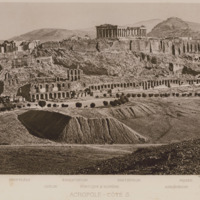 The Acrocorinth. In the foreground the ruins of Ancient Corinth. 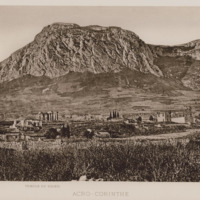 The Choregic monument of Lysicrates. 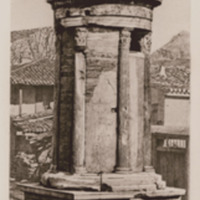 View of Kerameikos cemetery, with some of the funerary monuments at the site. 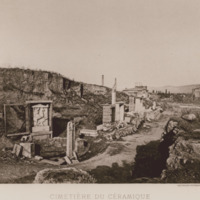 The stele of Hegeso from Kerameikos (today at National Archaeological Museum, Athens). 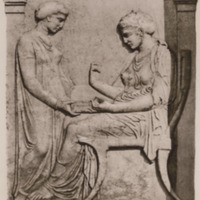